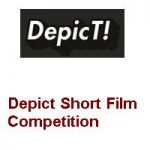 Depict Short Film Competition – Can you do it in 90 seconds?

Filmmakers worldwide! Accept the Depict challenge and get creative in just a minute and a half to be in with a chance of winning:

* invaluable exposure and promotion through depict.org and at Encounters Film Festival – including a Festival pass with all the trimmings, tickets to the popular Depict Showcase and the prestigious Awards Ceremony.

* winning shorts get complimentary BBFC certification and are made available for theatrical screenings to exhibitors across the UK.

Oh, and entry is free!

Find out more and enter your film now

Other Awards and Competitions In India

Get Timely alerts for Scholarships, Fellowships , Awards and Competitions, Internships  through SMS / Email / Whatsapp Join with US

SIGN UP FOR SCHOLARSHIPS IN INDIA DAILY UPDATES
Subscribe Now to know New Scholarships, Grants, Fellowships, Awards and Competitions in your Inbox